Container traffic gives us an idea about the volume of goods being exported and imported - and possibly some hints about the trade report for March. LA area ports handle about 40% of the nation's container port traffic. 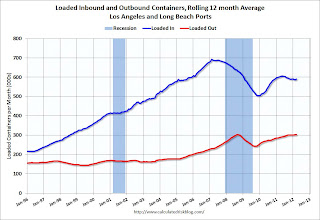 The rolling 12 months of imports started declining last year - and exports seemed to stall. But it now appears both imports and exports are increasing again (slightly). 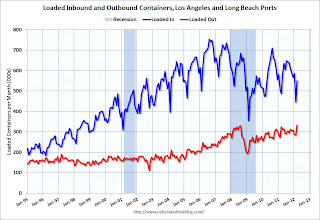 This is a new record for exports (just above the pre-recession peak).

Note: Every year imports decline in February mostly because of the Chinese New Year and rebounds in March. February 2012 was an especially steep decline, and some of the February traffic was probably pushed into March.