Even with the year-over-year increase in February, the rolling 12 month total is mostly moving sideways. 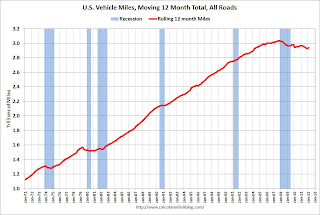 Currently miles driven has been below the previous peak for 51 months - and still counting. 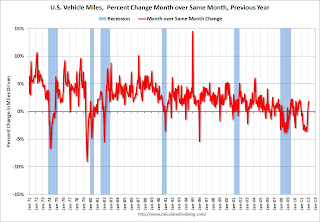 This is the third consecutive month with a year-over-year increase in miles driven - for the first time since 2010.

Even though gasoline prices are up sharply over the last few of months, prices also increased quickly last year in March and April - so we might not see a year-over-year decline in miles driven in the coming months.

The lack of growth in miles driven over the last 4+ years is probably due to a combination of factors: the great recession and the lingering effects, the high price of gasoline - and the aging of the overall population. HS Dent has a graph of gasoline demand by age (see page 13 of Age of Consumer demand curves based on Census Bureau data) (ht Doug Short) - so this is probably, at least partially, another impact from the aging of the baby boomers (ht Brian).
Posted by Calculated Risk on 4/23/2012 01:50:00 PM
Newer Post Older Post Home