From the National Federation of Independent Business (NFIB): Small Business Confidence in a Lull


Rising just one tenth of one percent in January, the Small-Business Optimism Index settled at 93.9, a slight increase from the December 2011 reading, according to the National Federation of Independent Business (NFIB). While the increase marks five consecutive months of improvement, the readings from January and February 2011 were higher, indicated no net gain for the calendar year. Historically, optimism remains at recession levels. While owners appeared less pessimistic about the outlook for business conditions and real sales growth, that optimism did not materialize in hiring or increased inventories plans.

“The most positive statement that can be made about January’s reading is that the Index did not go down; a change of 0.1 points is essentially no change and it is hardly indicative of a surge in economic activity,” said NFIB Chief Economist Bill Dunkelberg.

Note: Small businesses have a larger percentage of real estate and retail related companies than the overall economy. 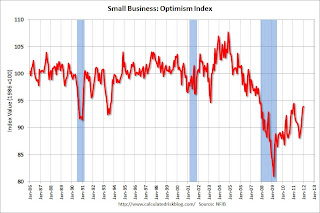 The first graph shows the small business optimism index since 1986. The index increased to 93.9 in January from 93.8 in December. This is the fifth increase in a row after declining for six consecutive months.

The second graph shows the net hiring plans for the next three months. 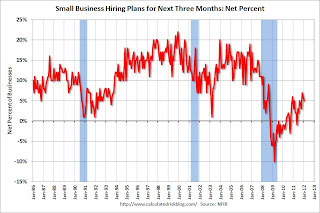 Hiring plans declined slightly in January, but the trend is up.

According to NFIB: “Over the next three months, 13 percent plan to increase employment (up 4 points), and 7 percent plan to reduce their workforce (down 1 point), yielding a seasonally adjusted net 5 percent of owners planning to create new jobs, a 1 point decline from December. There is no surge in hiring indicated by these numbers..."

Twenty two percent of small business owners reported that weak sales continued to be their top business problem in January. Currently 18% are reporting taxes as the most important problem, and 20% are reporting regulations - just below the 23% reporting "poor sales". 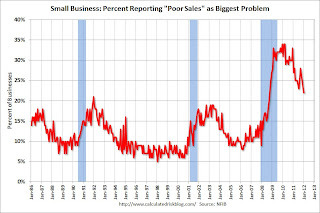 In good times, small business owners usually report taxes and regulation as their biggest problems. This is another small sign of improvement for small businesses, but lack of demand is still the key problem.

The optimism index declined sharply in August due to the debt ceiling debate and has now rebounded to about the same level as early in 2011. This index is still low - probably due to a combination of sluggish growth, and the high concentration of real estate related companies in the index.
Posted by Calculated Risk on 2/14/2012 08:00:00 AM
Newer Post Older Post Home