This was at the consensus forecast of 13.6 million SAAR. 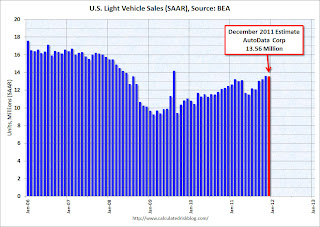 The annualized sales rate was essentially unchanged from November, and the last two months were the strongest since June 2008 excluding cash-for-clunkers.

This shows the huge collapse in sales in the 2007 recession. This also shows the impact of the tsunami and supply chain issues on sales, especially in May and June. 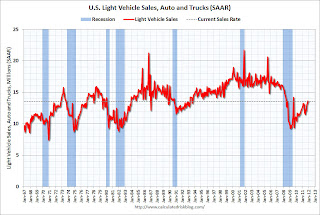 Growth in auto sales should make a strong positive contribution to Q4 GDP. Sales in Q3 averaged 12.45 million SAAR, and sales averaged 13.46 million SAAR in Q4, an increase of 8.1% over Q3.