Earlier I posted some questions for next year: Ten Economic Questions for 2012. I'm trying to add some thoughts, and a few predictions for each question.

5) Employment: The U.S. economy added 1.64 million total non-farm jobs or just 137 thousand per month in 2011. There were 1.92 million private sector jobs added in 2011, or about 160 thousand per month. Although this was an improvement from 2010, this was still weak payroll growth for a recovery. How many payroll jobs will be added in 2012?

First a little "good" news. It appears that most of the state and local government job cuts will be over by mid year 2012. Just eliminating the employment drag from these job cuts will help. 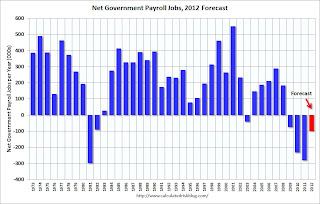 For 2011, the BLS reported 280 thousand government jobs lost, and my guess is this will slow to around 100 thousand in 2012 and most of the jobs lost will be in the first half of the year. 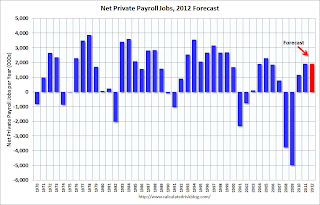 Here is a graph of the annual change in private payrolls since 1970.

Last year was disappointing given the high level of unemployment, but it was still the 2nd best year for private job creation since the 1990s.