The following graph shows inventory by month since 2004. In 2004 (black line), inventory was fairly flat and declined at the end of the year. In 2005 (dark blue line), inventory kept rising all year - and that was a clear sign that the housing bubble was ending. 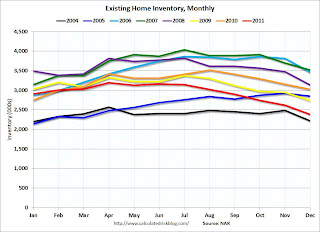 This year (dark red) inventory is at the lowest level since 2004. Inventory is still elevated - especially with the much lower sales rate - but lower inventory levels put less downward pressure on house prices (of course the level of distressed properties is still very high, and there is a significant shadow inventory).

Note that inventory usually starts increasing in February and March, and peaks in July and August. The seasonal increase in inventory will be something to watch this spring and summer. 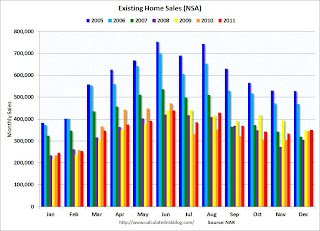 The level of sales is still elevated due to investor buying. The NAR noted:


All-cash sales accounted for 31 percent of purchases in December, up from 28 percent in November and 29 percent in December 2010. Investors account for the bulk of cash transactions.