The number of California homes going into foreclosure dropped in the fourth quarter of 2011 to the second-lowest level in more than four years, the result of evolving lender and mortgage servicer policies as well as shifting market conditions, a real estate information service reported.

A total of 61,517 Notices of Default (NODs) were recorded at county recorders offices during the fourth quarter. That was down 13.7 percent from 71,275 for the prior three months, and down 11.9 percent from 69,799 in fourth-quarter 2010, according to San Diego-based DataQuick.

"We are certainly seeing a lower level of foreclosure activity than a year or two ago. The question is, how much of that decline is due to market conditions, and how much is due to policy changes that try to address economic distress and lower home values," said John Walsh, DataQuick president.

"Five years ago almost all mortgage payment delinquencies would have triggered a default notice after a certain amount of time. Strategies now include short sales, refinances, interest rate changes, principal reduction as well as just plain waiting longer. It will be interesting to see how this plays out as the economy improves and the housing market finds its footing," Walsh said.

As Walsh noted, some of the decline is probably due to process issues. California is a non-judicial state, and it still takes an average of 9.7 months to foreclose after the Notice of Default is filed (the shortest possible period is 3 months and 21 days). 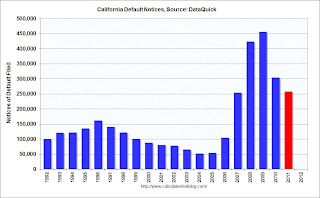 This graph shows the annual Notices of Default (NODs) filed in California.

California had a significant housing bust in the early '90s, with defaults peaking - and prices bottoming - in 1996. That bust was mild compared to the recent housing bust - and defaults are still way above the 1996 peak.
Posted by Calculated Risk on 1/24/2012 03:58:00 PM
Newer Post Older Post Home