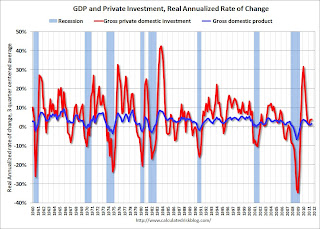 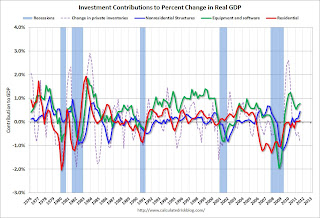 The dashed purple line is the "Change in private inventories". This category has significant ups and downs, but is always negative during a recession, and provides a boost to GDP just after a recession. Change in private inventories has made a large negative contribution to GDP over the last four quarters, and will probably make a positive contribution in Q4.

The key leading sector - residential investment - has lagged this recovery because of the huge overhang of existing inventory. Usually residential investment is a strong contributor to GDP growth and employment in the early stages of a recovery, but not this time - and that weakness is a key reason why the recovery has been sluggish so far.

Equipment and software investment has made a significant positive contribution to GDP for nine straight quarters (it is coincident).

And residential investment has finally turned slightly positive and will make a positive contribution to GDP in 2011 for the first time since 2005. 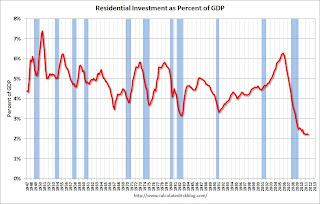 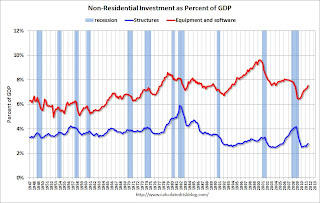 Equipment and software investment has increased sharply, but is still at a fairly normal level of GDP. And non-residential investment in structures increased in Q3, but this is still very low.

A key fear is that the financial crisis in Europe could drag the US economy into another recession. That is possible, especially combined with ongoing household deleveraging and fiscal tightening in the US (with current policy, Federal, state and local governments will all subtract from GDP growth in 2012).