A few weeks ago, I posted: Labor Force Participation Rate: The Kids are Alright

Catherine Rampell at the NY Times adds some more data: Instead of Work, Younger Women Head to School


Workers are dropping out of the labor force in droves, and they are mostly women. In fact, many are young women. But they are not dropping out forever; instead, these young women seem to be postponing their working lives to get more education. 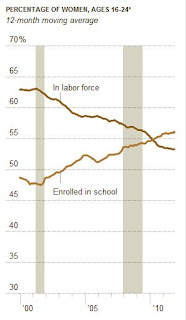 [M]any of the workers on the sidelines are young people upgrading their skills, which could portend something like the postwar economic boom, when millions of World War II veterans went to college through the G.I. Bill instead of immediately entering, and overwhelming, the job market.

Both men and women are going back to school, but the growth in enrollment is significantly larger for women (who dominated college campuses even before the financial crisis). In the last two years, the number of women ages 18 to 24 in school rose by 130,000, compared with a gain of 53,000 for young men.
...
The main risk in going back to school is the accompanying student loan debt.

The flip side is that many older workers are also going back to school and getting student loans, see: Middle-aged borrowers piling on student debt (ht Ann)

Middle-aged borrowers are piling up student debt faster than any other age group, according to a new analysis obtained by Reuters.

That is deeply concerning.

But in the long run, more education is a positive for the economy - and Rampell's article suggests the kids (well, young adults) are alright!
Posted by Calculated Risk on 12/29/2011 04:13:00 PM
Newer Post Older Post Home