Note: this includes the downward revisions for years 2007 through 2011.

The NAR reports: Existing-Home Sales Continue to Climb in November


Total existing-home sales, which are completed transactions that include single-family, townhomes, condominiums and co-ops, increased 4.0 percent to a seasonally adjusted annual rate of 4.42 million in November from 4.25 million in October, and are 12.2 percent above the 3.94 million-unit pace in November 2010.
...
Total housing inventory at the end of November fell 5.8 percent to 2.58 million existing homes available for sale, which represents a 7.0-month supply4 at the current sales pace, down from a 7.7-month supply in October.
...
Also released today are benchmark revisions to historic existing-home sales. The 2010 benchmark shows there were 4,190,000 existing-home sales last year, a 14.6 percent revision from the previously projected 4,908,000 sales. For the total period of 2007 through 2010, sales and inventory were downwardly revised by 14.3 percent. The revisions are expected to have a minor impact on future revisions to Gross Domestic Product. 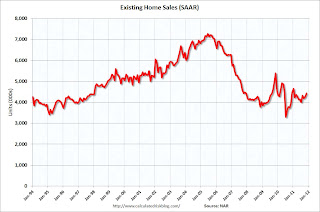 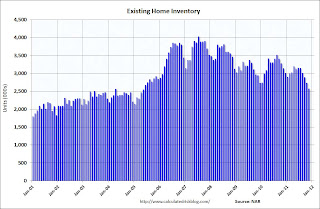 According to the NAR, inventory decreased to 2.58 million in November from 2.74 million in October (revised). This is the lowest level of inventory since July 2005. 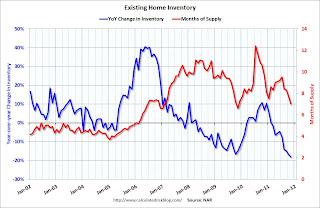 Inventory decreased 18.1% year-over-year in November from November 2010. This is the ninth consecutive month with a YoY decrease in inventory.

Months of supply decreased to 7.0 months in November, down from 7.7 months in October. This is still a little higher than normal. These sales numbers were right at the Tom Lawler's estimate of 4.4 million.

I'll have much more on the revisions later.