As part of the new home sales report, the Census Bureau reported that the average price for new homes fell to the lowest level since September 2003. 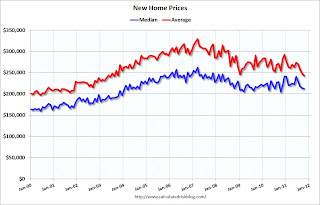 This makes sense - to compete with all the distressed sales, the builders have had to build smaller and less expensive homes. 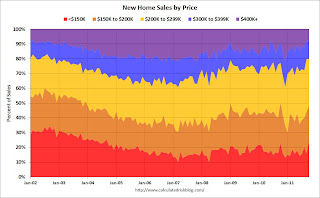 This graph starts in 1994, but the relationship has been fairly steady back to the '60s. Then along came the housing bubble and bust, and the "distressing gap" appeared due mostly to distressed sales. 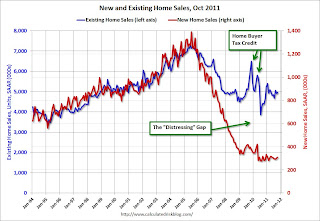 The flood of distressed sales has kept existing home sales elevated, and depressed new home sales since builders can't compete with the low prices of all the foreclosed properties.

I expect this gap to close over the next few years once the number of distressed sales starts to decline.

Note: The National Association of Realtors (NAR) is working on a benchmark revision for existing home sales numbers and I expect significant downward revisions to sales estimates for the last few years - perhaps as much as 10% to 15% for 2011. Even with these revisions, most of the "distressing gap" will remain.