The National Association of Home Builders (NAHB) reports the housing market index (HMI) declined in September to 14 from 15 in August. Any number under 50 indicates that more builders view sales conditions as poor than good.

From the NAHB: Builder Confidence Virtually Unchanged in September


Builder confidence in the market for newly built, single-family homes dipped by a single point to 14 on the National Association of Home Builders/Wells Fargo Housing Market Index (HMI) for September, released today. The index has now held between 13 and 16 for six consecutive months.
...
"The fact that the HMI continues to hover within such a narrow, low range reflects builders' awareness that many consumers are simply unwilling or unable to move forward with a home purchase in today's uncertain economic climate," added NAHB Chief Economist David Crowe. "While some bright spots are beginning to emerge in about a dozen select metro areas, the broader picture remains fairly bleak due to the weak economy and job market."
...
Each of the HMI's three component indexes recorded declines in September. The component gauging current sales conditions slipped one point to 14, while the components gauging sales expectations in the next six months and traffic of prospective buyers each declined two points, to 17 and 11, respectively.

The Midwest was the only region to post a gain in its HMI score for September, edging up one point to 11. Meanwhile, the Northeast and South each posted two-point declines to 15 and the West posted a three-point decline to 12. 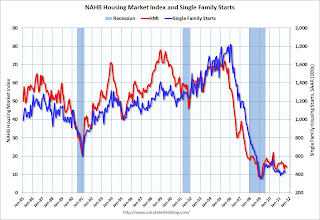 This graph compares the NAHB HMI (left scale) with single family housing starts (right scale). This includes the September release for the HMI and the July data for starts (August housing starts will be released tomorrow).

Both confidence and housing starts have been moving sideways at a very depressed level for several years.
Posted by Calculated Risk on 9/19/2011 10:00:00 AM
Newer Post Older Post Home