From economist Tom Lawler: While normally I don’t put out an “early read” on existing home sales this early – mainly because not enough realtor associations/boards/MLS have released their stats to get a “good” national read – the reports that have come in so far suggest to me that existing home sales in August rebounded from July on a seasonally adjusted basis.

Incoming data, in my view, suggest a national YOY gain well above that – probably in the 16.8% range or so, which would imply that the NAR’s existing home sales estimate for August will probably come in at a seasonally adjusted annual rate of around 4.87 million, a gain from July of about 4.3%, and I think there may be more upside than downside risk to that forecast. 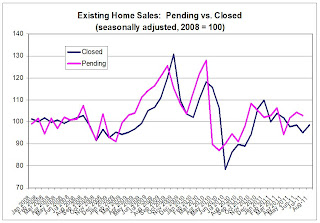 Such an increase, by the way, is not broadly inconsistent with the latest pending home sales index, which showed a mild decline in July. After all, the gains in previous months didn’t show up in similar gains in closed sales, suggesting either (a) increased cancellations; (b) increased delays from contract to closing; or (c) a combination of both. Right now, the correct answer appears to be “c.” (August reflects Lawler forecast).