Note: This is one of the industry specific measures that I follow. I only post this every few weeks or so.

From HotelNewsNow.com: STR: US results for week ending 3 September


In year-over-year comparisons for the week, occupancy rose 6.6 percent to 61.1 percent, average daily rate increased 4.8 percent to US$99.04, and revenue per available room finished the week up 11.6 percent to US$60.53. 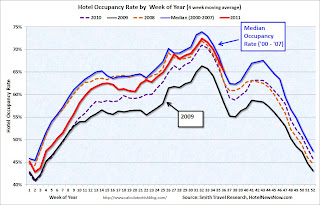 Even though the occupancy rate has recovered, ADR is still lower than before the recession. 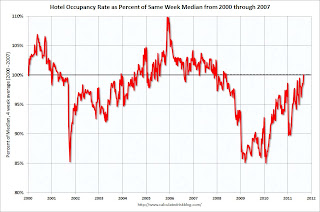 This shows the decline in the occupancy rate during and following the 2001 recession. The sharp decline in 2001 was related to 9/11, and the sharp increase towards the end of 2005 was due to Hurricane Katrina.

The occupancy rate really fell off a cliff in 2008, and has slowly recovered back to the median.