Schedule for Week of Aug 28th

This will be a busy week for economic data. The key release is the August employment report on Friday. Other key releases will be the July Personal Income & Outlays report on Monday, Case-Shiller house prices on Tuesday, the ISM manufacturing index on Thursday, and auto sales also on Thursday.

Also the FOMC minutes for the August 9th meeting, to be released on Tuesday, might include a discussion of additional policy options. 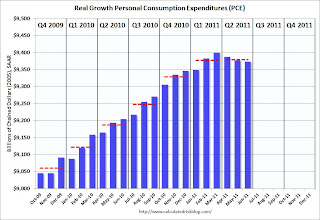 10:00 AM: Pending Home Sales Index for July. The consensus is for a 1% decrease in the index.

10:30 AM: Dallas Fed Manufacturing Survey for August. The Texas production index increased 10.8 in July. The consensus is for a reading of -6 (contraction) in August. This is the last of the regional surveys, and most of the surveys have been weak. 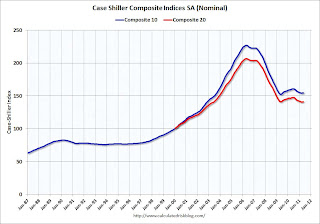 9:00 AM: S&P/Case-Shiller Home Price Index for June. Although this is the June report, it is really a 3 month average of April, May and June.

The consensus is for flat prices in June. The CoreLogic index showed a 0.7% increase in June.

10:00 AM: Conference Board's consumer confidence index for August. The consensus is for a decrease to 52.5 from 59.6 last month due to the debt ceiling debate.

2:00 PM: FOMC Minutes, Meeting of Aug 9, 2011. The minutes could include a discussion of additional policy options.


----- Wednesday, Aug 31st -----
7:00 AM: The Mortgage Bankers Association (MBA) will release the mortgage purchase applications index. This index has been very weak over the last several months and was at the lowest level in 15 years last week.

8:15 AM: The ADP Employment Report for August. This report is for private payrolls only (no government). The consensus is for +100,000 payroll jobs in August, down from the +114,000 reported in July.

10:00 AM: Manufacturers' Shipments, Inventories and Orders for July (Factory Orders). The consensus is for a 1.8% increase in orders.

10:00 AM: Construction Spending for July. The consensus is for a 0.1% increase in construction spending.

10:00 AM: ISM Manufacturing Index for August. The consensus is for a decrease to 48.5 from 50.9 in July. Based on the regional manufacturing surveys, the ISM index will probably be below 50 in August for the first time since July 2009 (indicating contraction). 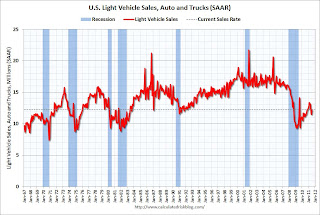 This graph shows light vehicle sales since the BEA started keeping data in 1967. The dashed line is the May sales rate.


An estimated 1,087,000 new cars will be sold in August for a projected Seasonally Adjusted Annualized Rate (SAAR) of 12.3 million, forecasts Edmunds.com, the premier online resource for automotive information. The sales pace is virtually flat compared to July’s 12.2 million SAAR. 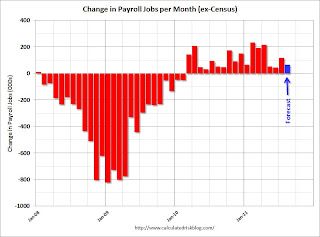 The consensus is for an increase of 67,000 non-farm payroll jobs in August, down from the 117,000 jobs added in July. The lower number is partially related to the Verizon strike that is now over.

This graph shows the net payroll jobs per month (excluding temporary Census jobs) since the beginning of the recession. The consensus forecast for August is in blue.

The consensus is for the unemployment rate to hold steady at 9.1% in August. 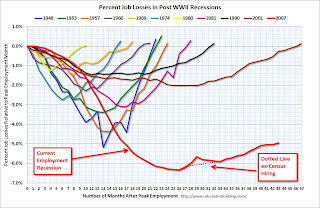 This second employment graph shows the percentage of payroll jobs lost during post WWII recessions. This shows the severe job losses during the recent recession.

Through the first seven months of 2011, the economy has added 930,000 total non-farm jobs or just 133 thousand per month. This is a better pace of payroll job creation than last year, but the economy still has 6.8 million fewer payroll jobs than at the beginning of the 2007 recession.