For a discussion on GDI, see from Fed economist Jeremy Nalewaik, “Income and Product Side Estimates of US Output Growth,” Brookings Papers on Economic Activity. An excerpt:

In discussing the information content of these two sets of estimates, the confusion often starts with the nomenclature. GDP can mean either the true output variable of interest, or an estimate of that output variable based on the expenditure approach. Since these are two very different things, using “GDP” for both is confusing. Furthermore, since GDI has a different name than GDP, it may not be initially clear that GDI measures the same concept as GDP, using the equally valid income approach. 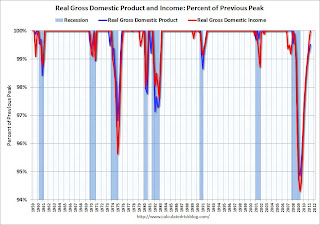 However, by other measures - like real personal income less transfer payments and employment - the economy is still far below the pre-recession peak.
Posted by Calculated Risk on 8/26/2011 06:15:00 PM
Newer Post Older Post Home