Birth/Death Model and Unemployment by Duration and Education

Last month I mentioned that anyone who subtracts the Not Seasonally Adjusted (NSA) birth/death model numbers from the headline SA payroll employment is making a mistake. Unfortunately some sites are still making this error.

Here is a post I wrote last month Employment: A comment on the Birth/Death Model. The key point is that the Birth/Death model minimizes the primary sampling error due to employment growth generated by new business formations. The model does miss turning points, but the BLS is now updating the estimation quarterly, and this should minimize the errors. 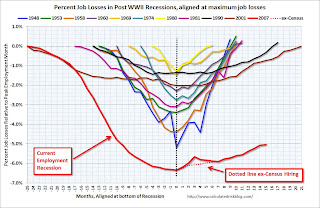 Second, the graph server took the surge in traffic this morning as an "attack". This unfortunately caused some errors when clicking on the graphs for larger images (many readers just saw text). I apologize for the inconvenience.

Here is a repeat of the offending graph. If you click on the graph, the graph gallery should open with all of the employment related graphs (the tabs at the top of the gallery are for other topics: housing, house prices, manufacturing, etc.) 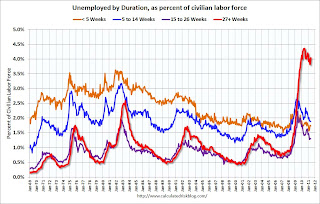 In general, all four categories are trending down, although the "27 weeks and over" category increased sharply this month.

Note that the "less than 5 weeks" used to be much higher, even during periods of strong job growth. This is probably because of a change in hiring practices that resulted in less turnover. 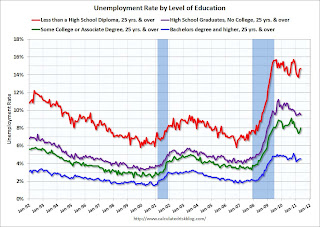 Unfortunately this data only goes back to 1992 and only includes one previous recession (the stock / tech bust in 2001). Clearly education matters with regards to the unemployment rate - and it appears all four groups are generally trending down, although only "High School Graduates, No College, 25 yrs. & over" decreased in May.

Although education matters for the unemployment rate, it doesn't appear to matter as far as finding new employment (all four categories are only gradually declining). 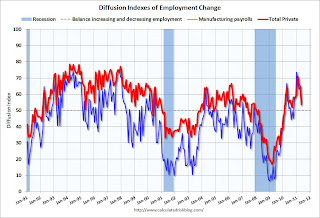 The decline in both indexes was another negative in the May employment report.