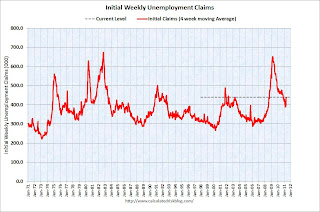 This is the highest level for the 4-week average since last November.

I plan on posting on existing home sales. Then I'll be on the MBA conference call - and post on that data - and then I'll get back to the Philly Fed.
Posted by Calculated Risk on 5/19/2011 08:30:00 AM
Newer Post Older Post Home