The Census Bureau reports New Home Sales in April were at a seasonally adjusted annual rate (SAAR) of 323 thousand. This was up from a revised 301 thousand in March (revised from 300 thousand). 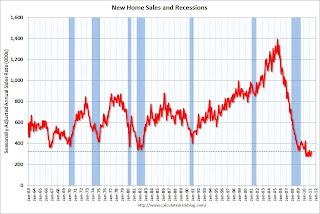 And a long term graph for New Home Months of Supply: 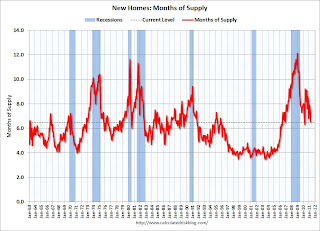 Months of supply decreased to 6.5 in April from 7.2 months in March. The all time record was 12.1 months of supply in January 2009. This is still higher than normal (less than 6 months supply is normal).


The seasonally adjusted estimate of new houses for sale at the end of April was 175,000. This represents a supply of 6.5 months at the current sales rate. 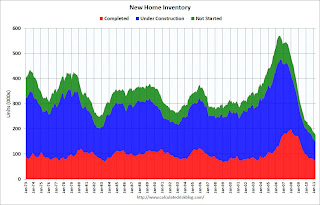 The inventory of completed homes for sale fell to 67,000 units in April. The combined total of completed and under construction is at the lowest level since this series started. 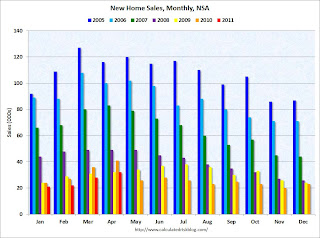 In April 2011 (red column), 32 thousand new homes were sold (NSA). This ties the record low for the month of April.

Although above the consensus forecast of 300 thousand, this ties the record low for April - and new home sales have averaged only 298 thousand SAAR over the last 12 months ... moving sideways at a very low level.
Posted by Calculated Risk on 5/24/2011 10:00:00 AM
Newer Post Older Post Home