The MBA reported that 12.84 percent of mortgage loans were either one payment delinquent or in the foreclosure process in Q1 2011 (seasonally adjusted). This is essentially the same as in Q4. There was a significant decline in Not Seasonally Adjusted (NSA) delinquencies, but that is the usual seasonal pattern.

The following graph shows the percent of loans delinquent by days past due. 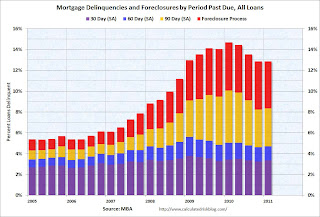 Loans 30 days delinquent increased to 3.35% from 3.26% in Q4. This is below the average levels of the last 2 years, but still higher than normal.

The percent of loans in the foreclosure process decreased to 4.52%.

Note: Because of the high level of delinquencies, there are some questions about the accuracy of the seasonal adjustment (similar to Q1 2010 - and also the problems with Case-Shiller House prices).

A couple of comments from MBA chief economist Jay Brinkmann on the conference call:

• Brinkmann: "Outlook is good. Market is on the mend."

• Florida has 24% of all loans in the foreclosure process. California is 2nd with 11% (but based on the size of the state that is actually below the national average as the next graph shows). 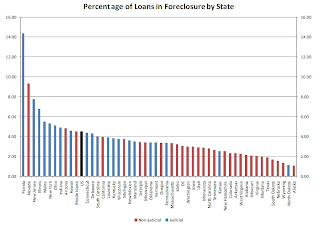 Florida, Nevada, New Jersey and Illinois are the top four states with loan in the foreclosure process.

From the MBA: Significant Declines in 90+ Day Delinquencies and Foreclosures in Latest MBA National Delinquency Survey


The delinquency rate for mortgage loans on one-to-four-unit residential properties increased to a seasonally adjusted rate of 8.32 percent of all loans outstanding as of the end of the first quarter of 2011, an increase of seven basis points from the fourth quarter of 2010, and a decrease of 174 basis points from one year ago, according to the Mortgage Bankers Association’s (MBA) National Delinquency Survey. The non-seasonally adjusted delinquency rate decreased 117 basis points to 7.79 percent this quarter from 8.96 percent last quarter.
...
The percentage of loans in foreclosure, also known as the foreclosure inventory rate, decreased 12 basis points overall to 4.52.

This data is a little confusing on a national basis because of the seasonal issues - and because of the concentration of problems in Florida and other states. Last year I thought overall delinquencies had peaked (that appears correct), and I think delinquencies will decline further this year as lenders work through the backlog of loans from 2005 through 2007. There was a slight increase in the 30 day delinquency bucket, possibly because of lower house prices - that is something to watch carefully over the next few quarters.
Posted by Calculated Risk on 5/19/2011 11:45:00 AM
Newer Post Older Post Home