CR Note: This is a long piece from economist Tom Lawler. First Lawler looks at the Census 2010 data and compares to the Housing Vacancies and Homeownership (HVS). This is very important because the HVS is used by many analysts to estimate the excess housing supply.

Later in the piece, Lawler looks at several quick and dirty methods of estimating the national excess housing supply. I suspect housing analysts and journalists will want to read the entire post (the excess supply is critical and just about everyone uses the HVS). For those only interested in the excess supply section, scan down to "excess supply" NOTE: I've added a page break because this is very long!

I will work up my own estimate of the excess supply very soon. The following is from Tom Lawler ...

Census released the decennial Census 2010 demographic profile of the United States today, and the data confirmed that other Census housing data derived from the Current Population Survey are based on a sample not representative of the US housing market as a whole.

On the homeownership front, the Census 2010 data showed that the US homeownership rate on April 1, 2010 was 65.1%, or 1.9 percentage points below estimates from both the Current Population Survey (CPS) Annual Social and Economic Supplement (ASEC) for March and the CPS Housing Vacancy Survey (HVS) for the first half of 2010.

According to Census, the 90% confidence interval for the annual CPS/HVS US homeownership rate was +/- 0.5 percentage points. Given the actual “gap” between the CPS/HVS estimate and the Census 2010 homeownership rate, it is pretty clear from a statistical standpoint that one can firmly reject the hypothesis that the sample used to generate housing tenure estimates from the CPS/HVS is NOT representative of the US as a whole.

Here is a chart showing homeownership rate estimates for (1) the last 3 decennial Censuses; (2) the CPS/ASEC; and (3) the CPS/HVS. 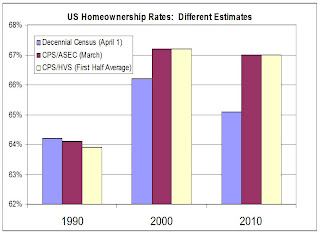 1 “Housing units held for occupancy by migratory labor employed in farm work during the crop season are tabulated as seasonal.” (HVS website).

Obviously, the HVS is just “missing” a lot of renters, though only some of the “miss” reflects occupied rental units mischaracterized as vacant for rent. Apparently many units occupied by renters are identified in the HVS as “other vacant.” I don’t know if it is the sample used or the sampling methodology used that is behind the gross mischaracterization of the US housing market in the HVS, though it’s probably a mix of both.

The rental vacancy rate for Census 2010 was a sizable 1.4 percentage points below that of the HVS, and was way below the HVS’ 90 percent confidence level.

On the next page is a similar comparison of Census 2000 and the HVS first-half 2000 estimates, with HVS numbers adjusted to equal the Census 2000 housing stock numbers.

Recall that a subsequent analysis of Census 2000 data suggested that (1) overall housing units were undercounted; (2) that the undercount was larger for vacant homes than for occupied homes; and (3) that a “better” estimate of the gross vacancy rate was 9.24%, instead of the “official” 8.99%. The study did not, however, identify the distribution of the vacant unit count “miss” by status. The study also suggested that the US homeownership rate was just a tad overstated in Census 2000 (but by only 0.1 percentage point).

Here is a table showing changes from 1990 to 2010 in select measures. Once again, recall that subsequent studies of Census 1990 and Census 2000 suggested undercounts both in housing unit counts and gross vacancy rates – for 1990, a ‘better” estimate of the gross vacancy rate from the post-Census Housing Unit Coverage Study is 10.46%, instead of the “official” 10.08%.

Many observers have been puzzled by the HVS vacancy measures for decades, and the HVS’ estimates showing higher rental and overall vacancy rates in 2000 compared to 1990 (not a great year for housing) always seemed “whacky,” and were not confirmed when Census 2000 data came out.

The table above highlights not just that the HVS data are “different” than the decennial Census data, but trends in the data are different as well, meaning that one can’t just use a “scalar” to adjust the HVS time series.

Net, it seems crystal clear that the HVS/CPS data do not portray an accurate picture of the US housing market, materially overstating US homeownership rates, and materially overstating gross, rental, and “ex seasonal” vacancy rates. As a result, estimates of the “excess supply” of housing in the US using the HVS/CPS data are almost certainly grossly overstated, and estimates in the 3.5 million range seem just plain silly.

Having said that, trying to determine the “excess supply” as of April 1, 2010, much less “walking it forward” to today, is not an easy task, as it requires one to determine what various “normal” vacancy rates are – and sadly, decennial Census data are only available – well, gee, once every 10 years. And since the HVS data are not only biased but show rising vacancy rate trends not matched by decennial Census data, using “long-run” trends from the HVS is unambiguously inappropriate. (And, of course, changes in definitions and sampling in the HVS over time make the “long-run” vacancy rates unusable as well.)

As a “Q&D” exercise, let’s assume that (1) the “relevant” measure to look at is the vacancy rate excluding seasonal, recreational, and occasional use; (2) either 2000 was normal, 1990 was normal, or the average of the two was normal; and (3) this vacancy measure was either accurate in the “official” Census data, or it was understated by the same difference as was the gross vacancy rate suggested by post-Census Housing Unit Coverage studies.

Now assuming 1990 was “normal” seems silly, as a few regional housing markets were still suffering from “irrational exuberance” and in a bust, and “real” home prices on a national basis declined for the next several years. But 2000 was hardly “normal” either, as various other inventory measures (e.g., month’s supply) were very low, and “real” home prices were rising at a faster-than-trend clip and rose at an even quicker pace in the next several years.

And what about today? Well, overall housing productions (completions plus MH placements) from April of last year though April of this year totaled about 720,000. Net “scrappage” numbers are completely unknown, but probably ranged from 150,000 to 300,000. So in the 13 months since Census 2010, the housing stock probably increased anywhere from 420,000 (low) to 570,000 (high).

And what about household growth? Well, er, the only reasonably timely data that are available are from …. you guessed it, the HVS, and we know THEY aren’t reliable!!! But let’s assume a “slow” (for a recovering economy) 13-month increase if, say, 800,000.

Of course, this is a very “Q&D” estimate. It’s also a “national” one, while “excesses” are much larger in some areas than others. It also doesn’t take into account differences in “types” of homes, which could be material.

Oh ... the decennial Census data also clearly indicate that housing “demographic” analyses and forecasts based on headship and homeownership rates from the CPS ASEC – such as the ones done by the Joint Center for Housing Studies – asymptote to being useless.
Posted by Calculated Risk on 5/26/2011 04:14:00 PM
Newer Post Older Post Home