Here is a look at European bond spreads from the Atlanta Fed weekly Financial Highlights released yesterday (graph as of May 24th).


Since the April FOMC meeting, peripheral European bond spreads over German bonds continue to be elevated, with those of Greece, Ireland, and Portugal setting record highs.

Since the April FOMC meeting, the 10-year Greece-to-German bond spread has widened by 192 basis points (bps), through May 24. The spreads for Ireland and Portugal have soared higher by 91 bps and 68 bps, respectively, over the same period. 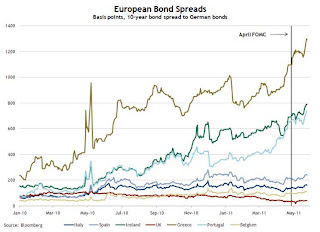 The spreads for Greece, Ireland and Portugal were all at record highs.

Spreads for Spain and Italy have increased recently, but are still much lower than for Greece, Ireland and Portugal. 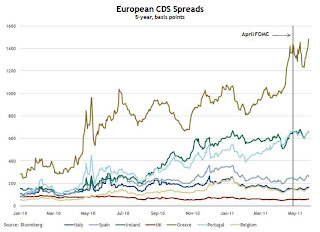 
The CDS spread on Greek debt has widened about 47 basis points (bps) since the April FOMC meeting, while those on Portuguese and Irish debt continue to be high.

The WSJ mentioned a new unreleased IMF paper that examines "debt restructurings by countries using a common currency": In Standoff Over Greece, Will ECB Have to Fold?


There aren't many precedents for debt restructurings by countries using a common currency, but there are some. An IMF working paper, as yet unpublished, examines them. According to two people who have read the paper, it shows that orderly debt restructurings—for example by Ivory Coast, which uses the West African CFA franc, and Grenada and Dominica, users of the East Caribbean dollar—haven't affected the viability of their respective currency unions.

Not great examples, but it isn't much of a jump to think this paper was motivated by the situation in Greece.
Posted by Calculated Risk on 5/27/2011 07:27:00 PM
Newer Post Older Post Home