The BuildFax Residential Remodeling Index was at 95.1 in February. This is based on the number of properties pulling residential construction permits in a given month.


The Residential BuildFax Remodeling Index rose 20% year-over-year—and for the sixteenth straight month—in February to 95.1, the highest February number in the index since 2006. Residential remodels in February were down month-over-month 3.9 points (4%) from the January value of 99.0 ...

All regions posted year-over-year gains, although the West posted a much higher year-over-year gain than the other regions, reaching well above index values for the West in February 2010, 2009, 2008, and 2007.
...
According to Joe Masters Emison, vice president of research and development at BuildFax, “February 2011 was a strong month for the industry, despite the fact that remodeling activity traditionally dips during the winter months. February 2011 was better than or equal to February 2010 in every region of the country.” 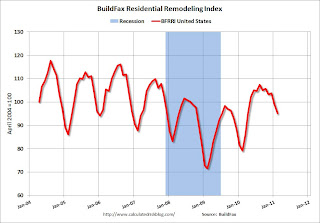 Although down month-to-month (off 4% from January) this is the highest level for a February since 2006 - and above the level of 2005 (during the home equity and remodel boom).

Note: permits are not adjusted by value, so this doesn't mean there is more money being spent, just more permit activity. Also some smaller remodeling projects are done without permits and the index will miss that activity. 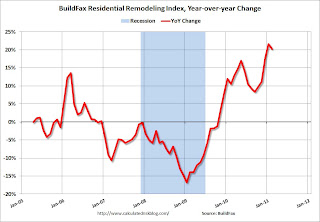 Since there is a strong seasonal pattern for remodeling, the second graph shows the year-over-year change from the same month of the previous year.

Although new home construction is still moving sideways, it appears that two other components of residential investment are increasing in 2011: multi-family construction and home improvement (based on this index). This fits with other reports too.