Here is a look at European bond spreads from the Atlanta Fed weekly Financial Highlights released today (graph as of April 27th): 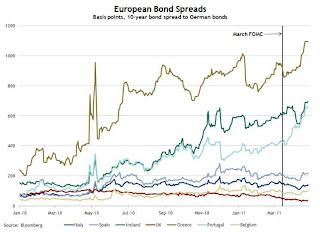 
Since the March FOMC meeting, peripheral European bond spreads (over German bonds) continue to be elevated, with those of Greece, Ireland, and Portugal setting record highs.

Since the March FOMC meeting, the 10-year Greece-to-German bond spread has widened by 189 basis points (bps), through April 26. The spreads for Ireland and Portugal have soared higher by 85 and 237 bps, respectively, over the same period. 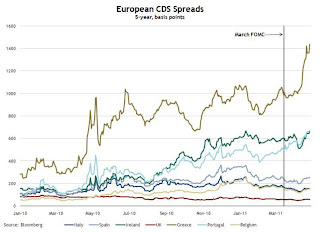 The CDS spread on Greek debt has widened about 430 basis points (bps) since the March FOMC meeting, while those on Portuguese and Irish debt continue to be high.

Here is a story from Reuters discussing the Greece CDS (and possible haircuts of 60%): Upward bias seen for Greek bond yields, trade choppy

The yield on Greece ten year bonds decreased to 15.7% today and the two year yield was down slightly to 24.9%.