Fannie Mae reported that the serious delinquency rate decreased to 4.48% in December from 4.50% in November. This is down from 5.38% a year ago.

Freddie Mac reported that the serious delinquency rate decreased to 3.82% in January from 3.84% in December. (Note: Fannie reports a month behind Freddie). This is down from 4.15% in January 2010.

These are loans that are "three monthly payments or more past due or in foreclosure". 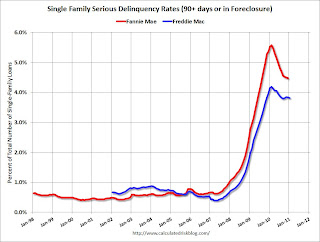 Some of the rapid increase in 2009 was probably because of foreclosure moratoriums, and also because loans in trial mods were considered delinquent until the modifications were made permanent. As modifications have become permanent, they are no longer counted as delinquent.

The slowdown in the decline was probably related to the new foreclosure moratoriums last year. Going forward, a key question is if falling house prices will lead to an increase in serious delinquent loans.