Case Shiller: Home Prices Off to a Dismal Start in 2011

This includes prices for 20 individual cities and and two composite indices (for 10 cities and 20 cities).

From S&P:Home Prices Off to a Dismal Start in 2011

ata through January 2011, released today by Standard & Poor’s for its S&P/Case-Shiller1 Home Price Indices ... show further deceleration in the annual growth rates in 13 of the 20 MSAs and the 10- and 20-City Composites compared to the December 2010 report. The 10-City Composite was down 2.0% and the 20-City Composite fell 3.1% from their January 2010 levels. San Diego and Washington D.C. were the only two markets to record positive year-over-year changes. However, San Diego was up a scant 0.1%, while Washington DC posted a healthier +3.6% annual growth rate. The same 11 cities that had posted recent index level lows in December 2010, posted new lows in January. 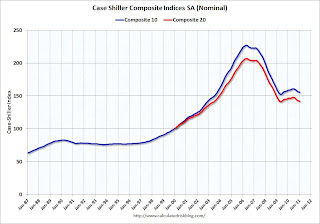 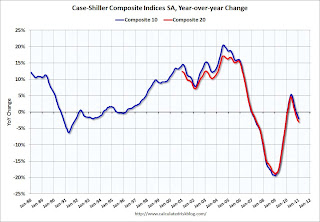 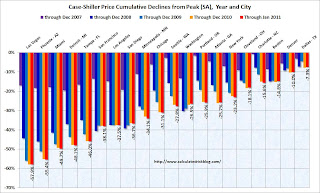 Prices increased (SA) in 8 of the 20 Case-Shiller cities in January seasonally adjusted. From S&P (NSA):

Both composite indices are still slightly above the post-bubble low (SA), but the indexes will probably be at new lows in early 2011.
Posted by Calculated Risk on 3/29/2011 09:00:00 AM
Newer Post Older Post Home