The "Curse of Negative Equity"

We will be discussing the impact of negative equity for years. Toluse Olorunnipa at the Miami Herald has an anecdote: The curse of negative home equity


Wesley Ulloa bought her first condo for $230,000 in 2007, and watched helplessly as it lost two-thirds of its value [to about $80,000 today] ... She’s one of hundreds of thousands of South Floridians coping with the reality of being underwater on their mortgages—one of the most widespread side effects of the real estate market collapse.

The choices are to tough it out, try for a modification or short sale, or just default. All bad choices - and this will limit her choices in the future too.

That percentage comes from CoreLogic's Q3 2010 negative equity report (Q4 will be released in a few weeks). 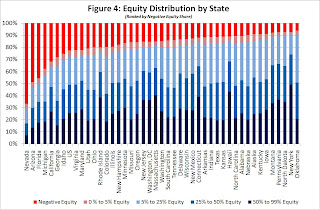 This graph shows the break down of equity by state (for home with a mortgage). Florida is bad, but Nevada and Arizona are in worse shape. And with house prices falling again, the number of homeowners with negative increase some more (depending on the number of modifications and foreclosures).