Gross domestic product fell 0.5pc in the fourth quarter, the most in more than a year, the Office for National Statistics reported on Tuesday.

• From the BLS: Regional and State Employment and Unemployment Summary 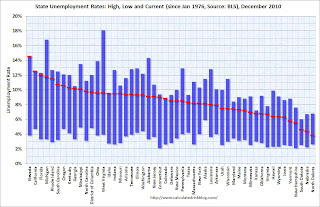 This was below expectations of a decline to 22.

• The Conference Board reported their consumer confidence index was at 60.6 (1985=100), up from 52.5 in December. This was above expectations of an increase to 54.2. Confidence is a coincident indicator and this suggests improvement in January.