Existing-home sales, which are completed transactions that include single-family, townhomes, condominiums and co-ops, rose 12.3 percent to a seasonally adjusted annual rate of 5.28 million in December from an upwardly revised 4.70 million in November, but remain 2.9 percent below the 5.44 million pace in December 2009.
...
Total housing inventory at the end of December fell 4.2 percent to 3.56 million existing homes available for sale, which represents an 8.1-month supply at the current sales pace, down from a 9.5-month supply in November. 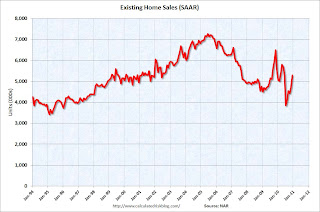 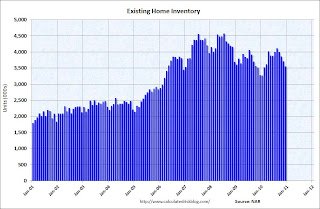 According to the NAR, inventory decreased to 3.56 million in December from 3.72 million in November. The all time record high was 4.58 million homes for sale in July 2008.

Inventory is not seasonally adjusted and there is a clear seasonal pattern with inventory peaking in the summer and declining in the fall - and then really declining during the holidays. So this decline was expected. 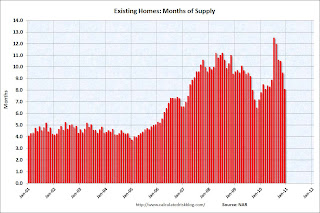 Months of supply decreased to 8.1 months in December from 9.5 months in November. The months of supply will probably increase over the next few months as sales slow a little, and inventory increases. This is still higher than normal.

These sales numbers were above the consensus of 4.9 million SAAR, and are slightly above what I expected (Lawler's forecast was 5.13 million). I'll have more later.
Posted by Calculated Risk on 1/20/2011 10:00:00 AM
Newer Post Older Post Home