Based on an estimate from Autodata Corp, light vehicle sales were at a 12.26 million SAAR in November. That is up 13.2% from November 2009, and up slightly from the October 2010 sales rate. 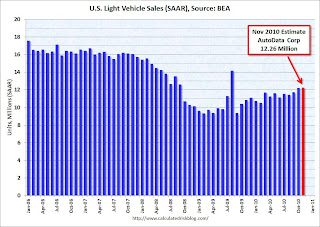 This is the highest sales rate since September 2008, excluding Cash-for-clunkers in August 2009. 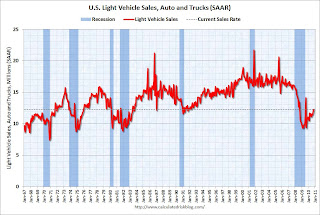 Note: dashed line is current estimated sales rate. The current sales rate is still near the bottom of the '90/'91 recession - when there were fewer registered drivers and a smaller population.

This was above most forecasts of around 12.0 million SAAR.