Schedule for Week of December 26th

The regional Fed surveys provide a hint about the ISM manufacturing index, as the following graph shows. Both the Philly Fed, and Empire State indexes showed improvement in December. 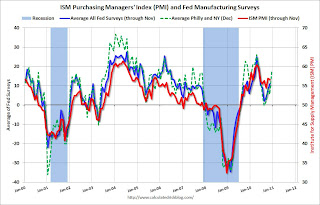 The ISM manufacturing index will released on Monday, Jan 3, 2011.


----- Tuesday, Dec 28th -----
9:00 AM: S&P/Case-Shiller Home Price Index for October. Although this is the October report, it is really a 3 month average of August, September and October. The consensus is for prices to decline about 0.4% in October; the fourth straight month of house price declines. 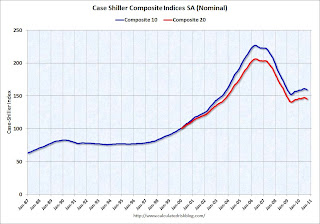 Prices are falling again, although still above the lows set in early 2009.

Prices in October might show a year-over-year decline for the composite indexes for the first time since 2009.

10:00 AM: Conference Board's consumer confidence index for December. The consensus is for an increase to 57.4 from 54.1 last month.

10:00 AM: Richmond Fed Survey of Manufacturing Activity for December. The consensus is for a reading of 11 (expansion), a slight increase from 9 last month.


----- Wednesday, Dec 29th -----
7:00 AM: The Mortgage Bankers Association (MBA) will release the mortgage purchase applications index. This index declined sharply following the expiration of the tax credit, and the index has only recovered slightly since then.


----- Thursday, Dec 30th -----
8:30 AM: The initial weekly unemployment claims report will be released. The number of initial claims has been trending down over the last couple of months. The consensus is for the same as last week at 420,000.

9:45 AM: Chicago Purchasing Managers Index for December. The consensus is for the same as in November at 62.5.

10:00 AM: Pending Home Sales Index for November. The consensus is for a 1% increase in contracts signed. It usually takes 45 to 60 days to close, so this will provide an early indication of closings in January.

11:00 AM: Kansas City Fed regional Manufacturing Survey for December. The index was at 14 in November.