The unemployment rate edged up to 9.8 percent in November, and nonfarm payroll employment was little changed (+39,000), the U.S. Bureau of Labor Statistics reported today. 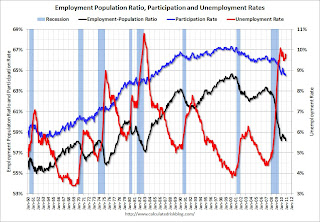 The Employment-Population ratio declined to 58.2% in November matching the cycle low set in 2009 (black line).

The Labor Force Participation Rate was steady at 64.5% in November (blue line). This is the percentage of the working age population in the labor force. The participation rate is well below the 66% to 67% rate that was normal over the last 20 years. 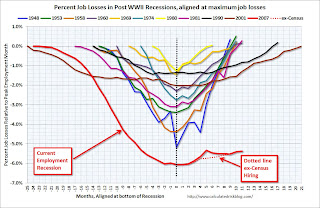 The second graph shows the job losses from the start of the employment recession, in percentage terms aligned at maximum job losses.

The dotted line is ex-Census hiring. The two lines have joined since the decennial Census is over.

For the current employment recession, employment peaked in December 2007, and this recession is by far the worst recession since WWII in percentage terms, and 2nd worst in terms of the unemployment rate (only the early '80s recession with a peak of 10.8 percent was worse).

This is a very disappointing employment report and far below expectations. I'll have much more soon ...
Posted by Calculated Risk on 12/03/2010 08:30:00 AM
Newer Post Older Post Home