From the Kansas City Fed: Survey of Tenth District Manufacturing

Tenth District manufacturing activity continued at a solid pace in December, and producers were increasingly optimistic about future activity. Price indexes in the survey rose further, with a marked increase in raw materials prices.

The net percentage of firms reporting month-over-month increases in production in December was 21, unchanged from 21 in November and up from 10 in October. ... The employment index increased to its highest level in three years, while the new orders for exports index edged down from 11 to 7.

This is the last of the regional Fed surveys for December. The regional surveys provide a hint about the ISM manufacturing index, as the following graph shows. 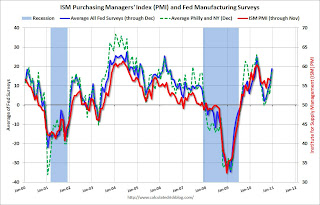 The regional surveys suggest an increase in manufacturing activity in December.