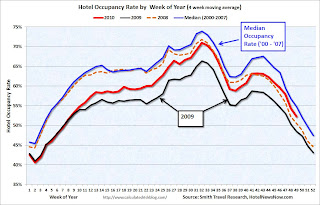 Notes: the scale doesn't start at zero to better show the change. The graph shows the 4-week average, not the weekly occupancy rate.

Note: Last week RevPAR (revenue per available room) was up compared to the same week two years ago (in 2008) for the first time this year. This week RevPAR is down 5.9% compared to 2008.