Seasonal Retail Hiring off to fast start in October

According to the BLS employment report, retailers hired seasonal workers at about the pre-crisis pace in October. 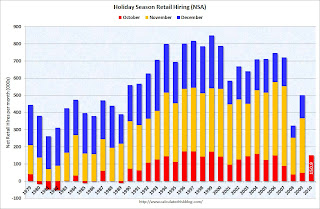 This really shows the collapse in retail hiring in 2008 and modest rebound in 2009.

This suggests retailers are fairly optimistic about the holiday season.