In addition to the CPI release this morning from the BLS, the Cleveland Fed released the median CPI and the trimmed-mean CPI:

So these three measures: core CPI, median CPI and trimmed-mean CPI, all increased less than 1% over the last 12 months. The indexes for rent and owners' equivalent rent both increased in October (some analysts blamed the disinflation trend on these measures of rent, but that wasn't true in October).

For the core CPI, the BLS noted:


Over the last 12 months, the index for all items less food and energy has risen 0.6 percent, the smallest 12-month increase in the history of the index, which dates to 1957 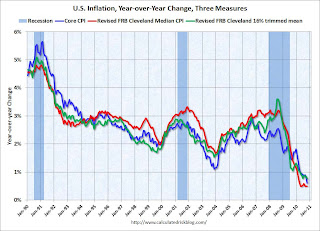 This graph shows these three measure of inflation on a year-over-year basis.

They all show that inflation has been falling, and that measured inflation is up less than 1% year-over-year.

Note: The Cleveland Fed has a discussion of a number of measures of inflation: Measuring Inflation