Note: This is a composite index based on a number of economic releases.

From the Chicago Fed: Index shows economic activity picked up in October


Led by improvements in production- and employment-related indicators, the Chicago Fed National Activity Index increased to –0.28 in October from –0.52 in September.
...
The index’s three-month moving average, CFNAI-MA3, decreased to –0.46 in October from –0.33 in September, reaching its lowest level since November 2009. October’s CFNAI-MA3 suggests that growth in national economic activity was below its historical trend for the fifth consecutive month. With regard to inflation, the amount of economic slack reflected in the CFNAI-MA3 suggests subdued inflationary pressure from economic activity over the coming year. 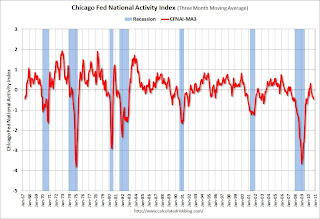 This index suggests the economy was sluggish in October.
Posted by Calculated Risk on 11/22/2010 08:30:00 AM
Newer Post Older Post Home