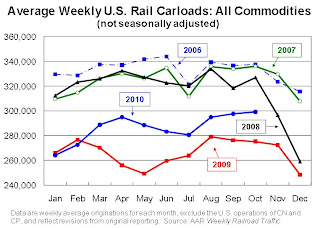 As the first graph shows, rail carload traffic collapsed in November 2008, and now, a year into the recovery, carload traffic has only recovered half way. However intermodal has performed better ... 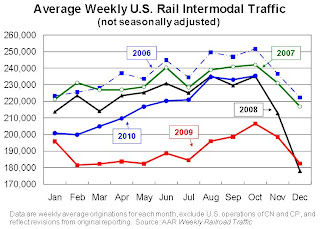 • On a non-seasonally adjusted basis, October is usually the highest intermodal month of the year for U.S. railroads. That’s the case again in 2010

• Well over half of U.S. intermodal traffic consists of imports or exports, and growth in international trade is a major factor behind higher intermodal traffic so far this year. In the first nine months of 2010, import TEUs (twenty-foot equivalent units) at six of the largest U.S. ports — Los Angeles, Long Beach, Savannah, New York & New Jersey, Seattle, and Norfolk — rose 19.9% in aggregate compared with the first nine months of 2009. Export TEUs at the same ports were up 15.5% in aggregate.excerpts with permission

This is consistent with a sluggish recovery.