Tenth District manufacturing activity continued to expand moderately in October, and producers were increasingly optimistic about future activity.
...
The net percentage of firms reporting month-over-month increases in production in October was 10, down from 14 in September ... the new orders index jumped from 9 to 16, its highest level since early 2007, and the employment index also edged higher [to -1].

The following graph compares the regional Fed surveys with the ISM manufacturing survey, including the Kansas City survey released this morning: 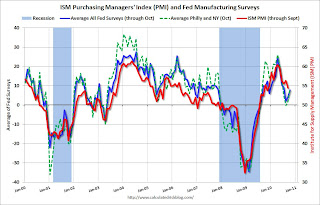 The Institute for Supply Management (ISM) PMI (red) is through September (right axis).

Although the internals were mixed in the regional Fed surveys, this graph suggests the ISM index will still show expansion in October. The ISM Manufacturing index will be released on Monday November 1st.
Posted by Calculated Risk on 10/28/2010 11:00:00 AM
Newer Post Older Post Home