The percentage of unemployed managers and executives relocating for a new position fell to a record low in the third quarter of 2010, as a slightly improved job market and greatly depreciated home values combined to eliminate this option for most job seekers.

Just 6.9 percent of job seekers who found employment in the third quarter relocated for the new position. That was down from a relocation rate of 13.4 percent in the same quarter a year ago ...

“Continued weakness in the housing market is undoubtedly the biggest factor suppressing relocation. Job seekers who own a home – even if they are open to relocating for a new job – are basically stuck where they are if they are unable or unwilling to sell their homes without incurring a significant loss,” said John A. Challenger, chief executive officer of Challenger, Gray & Christmas. 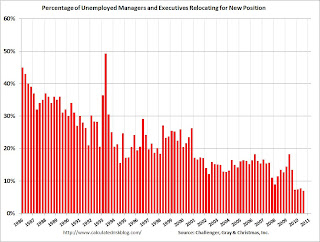 Here is the quarterly data from Challenger, Gray. Mobility has been trending down for some time, but really declined over the last year.

It is tough to move when you can't sell your home. Sometimes the new employer will pick up the short fall for key executives and managers, but it is probably too expensive in many cases now.


Less worker mobility [due to negative equity] is kind of like arteriosclerosis of the economy. It lowers the overall growth potential.

Perhaps as many as 15 to 20 million households will be saddled with negative equity by 2009. Even if most of these homeowners don't "walk away", there might still be a negative impact on the economy due to less worker mobility.

One of the strengths of the U.S. labor market has been the flexibility associated with labor mobility at all levels of employment - households could easily move from one region to another for better employment. The sharp decline in house prices, leaving homeowners with significant negative equity, appears to be limiting this flexibility.
Posted by Calculated Risk on 10/28/2010 02:31:00 PM
Newer Post Older Post Home