Here is a look at European bond spreads from the Atlanta Fed weekly Financial Highlights released today (graph as of Sept 7th): 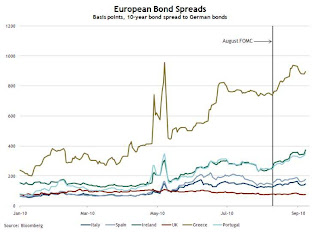 Irish and Portuguese bond spreads are currently at all-time highs, while the spread for Greek bonds remains extremely elevated.

Since the August FOMC meeting, the 10-year Greece-to-German bond spread has risen by 146 basis points (bps) ... through September 7. Similarly, with other European peripherals’ spreads, Portugal’s is higher by 99 bps during the period, and Spain’s is up by 20 bps.

Note: The Atlanta Fed data is a couple days old. Nemo has links to the current data on the sidebar of his site. The bond spreads have eased slightly over the last couple of days.