S&P/Case-Shiller released the monthly Home Price Indices for July (actually a 3 month average of May, June and July).

This includes prices for 20 individual cities, and two composite indices (10 cities and 20 cities).

From S&P: Home Prices Remain Stable Around Recent Lows According to the S&P/Case-Shiller Home Price Indices


Data through July 2010, released today by Standard & Poor’s for its S&P/Case-Shiller Home Price Indices, the leading measure of U.S. home prices, show that the annual growth rates in 16 of the 20 MSAs and the 10- and 20-City Composites slowed in July compared to June 2010. The 10-City Composite is up 4.1% and the 20-City Composite is up 3.2% from where they were in July 2009. For June they were reported as +5.0% and +4.2%, respectively. Although home prices increased in most markets in July versus June, 15 MSAs and both Composites saw these monthly rates moderate in July. 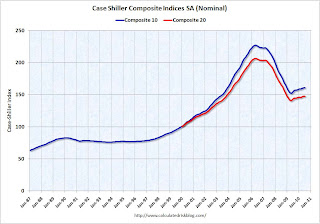 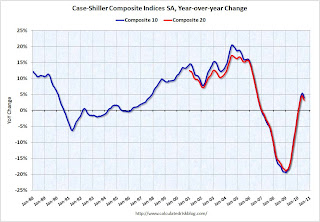 The year-over-year changes appear to be rolling over - and will probably be negative later this year. 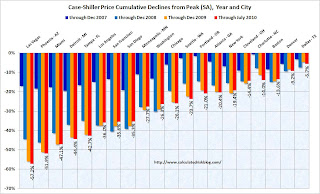 Prices increased (SA) in only 4 of the 20 Case-Shiller cities in July seasonally adjusted.