Nonfarm payroll employment changed little (-54,000) in August, and the unemployment rate was about unchanged at 9.6 percent, the U.S. Bureau of Labor Statistics reported today. Government employment fell, as 114,000 temporary workers hired for the decennial census completed their work. Private-sector payroll employment continued to trend up modestly (+67,000). 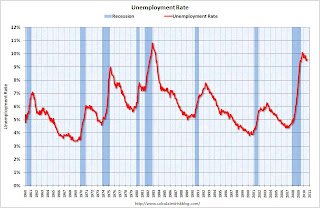 This graph shows the unemployment rate vs. recessions.

Nonfarm payrolls decreased by 54 thousand in August. The economy has gained 229 thousand jobs over the last year, and lost 7.6 million jobs since the recession started in December 2007. 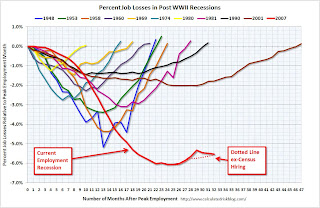 The dotted line is ex-Census hiring. The two lines have almost joined since the decennial Census hiring is almost over.

For the current employment recession, employment peaked in December 2007, and this recession is by far the worst recession since WWII in percentage terms, and 2nd worst in terms of the unemployment rate (only early '80s recession with a peak of 10.8 percent was worse).

This is another weak report, however the upwards revisions to June and July were a positive. The participation rate increased slightly - and that is good news - but the unemployment rate also increased. I'll have much more soon ...