Personal Bankruptcy Filings up 9% in July

The 137,698 consumer bankruptcies filed in July represented a 9 percent increase nationwide over the 126,434 filings recorded in July 2009, according to the American Bankruptcy Institute (ABI), relying on data from the National Bankruptcy Research Center (NBKRC). NBKRC’s data also showed that the July consumer filings represented a 9 percent increase from the 126,270 consumer filings recorded in June 2010. Chapter 13 filings constituted 28 percent of all consumer cases in July, a slight increase from June. 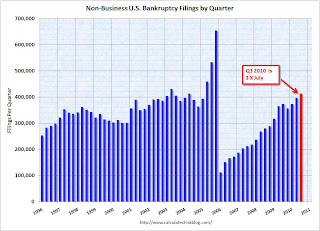 This graph shows the non-business bankruptcy filings by quarter using monthly data from the ABI and previous quarterly data from USCourts.gov.

Excluding 2005, when the so-called "Bankruptcy Abuse Prevention and Consumer Protection Act of 2005" was enacted (really a pro-lender act), the record year was in 2003 when 1.62 million personal bankruptcies were filed. This year will be close to that level.
Posted by Calculated Risk on 8/03/2010 05:42:00 PM
Newer Post Older Post Home