Note: CoreLogic reports the year-over-year change. The headline for this post is for the change from May 2010 to June 2010.

According to the CoreLogic HPI, national home prices, including distressed sales, increased by 1.4 percent in June 2010 compared to June 2009 and increased by 3.7 percent [revised] in May 2010 compared to May 2009. The June 2.3 percentage point deceleration from May is very large by historical standards. The deceleration was most pronounced in more expensive and distressed segments of the market. Excluding distressed sales, year-over-year prices only increased by 0.2 percent in June and May’s non-distressed HPI increased by 0.5 percent.”
...
“Home price volatility and collateral risk remain very high. The stabilization phase and policy intervention since the spring of 2009 has run its course. Prices are expected to further moderately decline as the economy remains weak through the fall” said Mark Fleming, chief economist for CoreLogic. 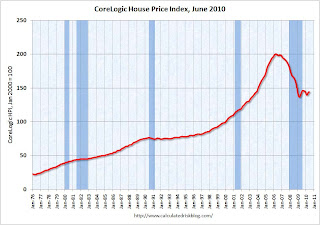 CoreLogic expects prices to "moderately decline" (more negative view than last month). I expect that we will see lower prices on this index later this year and into 2011. 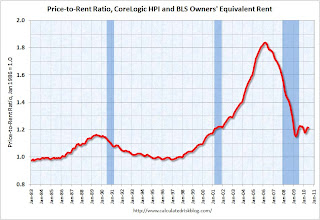 The second graph is an update on the price-to-rent ratio similar to the approach used by Fed economist John Krainer and researcher Chishen Wei in 2004: House Prices and Fundamental Value. Kainer and Wei presented a price-to-rent ratio using the OFHEO house price index and the Owners' Equivalent Rent (OER) from the BLS.

This graph shows the price to rent ratio using the CoreLogic data (January 2000 = 1.0).

This suggests that house prices are much closer to the bottom than the top, but that prices still have a ways to fall on a national basis.

This data is for June and was still impacted by the tax credit. I've been expecting this index to start showing price declines in July as sales collapsed.
Posted by Calculated Risk on 8/16/2010 12:13:00 PM
Newer Post Older Post Home