Note that the slight decline in homeowners with negative equity was mostly due to foreclosures.

CoreLogic reports that 11 million, or 23 percent, of all residential properties with mortgages were in negative equity at the end of the second quarter of 2010, down from 11.2 million and 24 percent from the first quarter of 2010. Foreclosures, rather than meaningful price appreciation, were the primary driver in the change in negative equity. An additional 2.4 million borrowers had less than five percent equity. Together, negative equity and near negative equity mortgages accounted for nearly 28 percent of all residential properties with a mortgage nationwide.
...
"Negative equity continues to both drive foreclosures and impede the housing market recovery. With nearly 5 million borrowers currently in severe negative equity, defaults will remain at a high level for an extended period of time," said Mark Fleming, chief economist with CoreLogic. 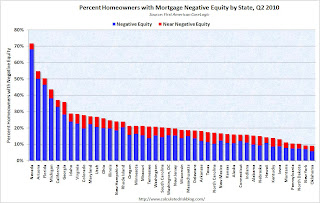 Click on image for larger graph in new window.

Although the five states mentioned above have the largest percentage of homeowners underwater, 10 percent or more of homeowners with mortgages in 33 states and the D.C. have negative equity.

CoreLogic also released a negative equity report for 164 metro areas (excel file) (with a minimum of 50,000 mortgages). Las Vegas is at the top with 72.8% of homeowners with mortgages in negative equity (another 3.3% are close) - and the top of the list is dominated by Nevada, California, Arizona and Florida - but it is amazing how widespread the problem is!