On a monthly basis, retail sales decreased 0.5% from May to June (seasonally adjusted, after revisions), and sales were up 4.8% from June 2009. 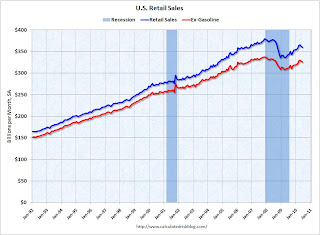 This graph shows retail sales since 1992.

This is monthly retail sales, seasonally adjusted (total and ex-gasoline).

Retail sales are up 7.3% from the bottom, but still off 5.2% from the pre-recession peak. 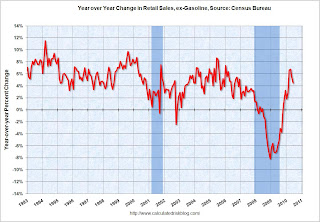 The second graph shows the year-over-year change in retail sales (ex-gasoline) since 1993.

Retail sales ex-gasoline increased by 4.5% on a YoY basis (4.8% for all retail sales). The year-over-year comparisons are easy now since retail sales collapsed in late 2008.

Retail sales have declined for two consecutive months. This is another weak report, and the decline in sales was worse than expected.
Posted by Calculated Risk on 7/14/2010 08:30:00 AM
Newer Post Older Post Home