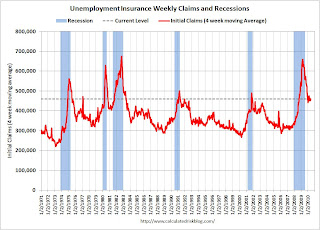 The four-week average of weekly unemployment claims increased this week by 1,750 to 459,000.

The dashed line on the graph is the current 4-week average. The current level of 453,000 (and 4-week average of 459,000) is still high, and suggests ongoing weakness in the labor market.

David Greenlaw at Morgan Stanley offered some possible reasons that claims have stayed elevated such as more ineligible filers and that "construction workers tend to file more frequently", although I'm not convinced. This is still disappointing ... the 4-week average has been moving sideways since December.
Posted by Calculated Risk on 6/03/2010 08:30:00 AM
Newer Post Older Post Home