One more graph based on data in the employment report ...

Temporary help services added 31,000 jobs over the month; employment in the industry has risen by 362,000 since September 2009. 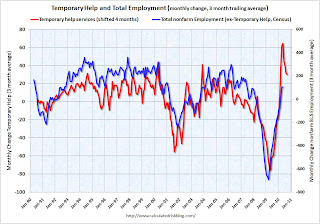 This graph is a favorite of those expecting a huge rebound in employment. The graph is a little complicated - the red line is the three month average change in temporary help services (left axis). This is shifted four months into the future.

Unfortunately the data on temporary help services only goes back to 1990, but it does appear that temporary help leads employment by about four months (although noisy).

The thinking is that before companies hire permanent employees following a recession, employers will first increase the hours worked of current employees (hours worked increased again in May) and also hire temporary employees.

Since the number of temporary workers increased sharply late last year, some people argued this was signaling the beginning of a strong employment recovery - probably in April and May. It didn't happen.

There was also evidence of a shift by employers to more temporary workers, and the joke in the comments was "We are all temporary now!". That is probably closer to the mark. The timing of this graph is useful - temporary help services does lead general employment - but the magnitude of the swings is probably less useful.

The National Federation of Independent Business released the employment outlook from their May survey: Small Business Still Reluctant to Hire

“Since January 2008, the average employment per firm has been negative every month, including May 2010, which yielded a seasonally adjusted loss of negative 0.5 workers per firm. Most firms did not change employment in May, but for those that did, 8 percent increased average employment by 2.4 employees and 20 percent reduced their workforces by an average of 4 employees. Small business job creation has not crossed the 0 line in over 2 years."
...
“Overall, the job creation picture is still bleak. Poor sales and uncertainty continue to hold back any commitments to growth, hiring or capital spending. Job creation plans have been running far below comparable quarters in the recovery from two other major recessions."