Retail Sales decline in May

On a monthly basis, retail sales decreased 1.2% from April to May (seasonally adjusted, after revisions), and sales were up 6.9% from May 2009 (easy comparison). 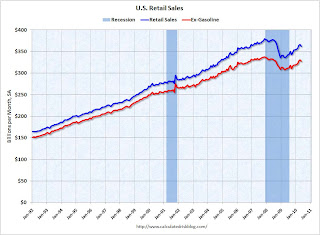 This graph shows retail sales since 1992. This is monthly retail sales, seasonally adjusted (total and ex-gasoline).

The red line shows retail sales ex-gasoline and shows the increase in final demand ex-gasoline has been sluggish.

Retail sales are up 8% from the bottom, but still off 4.6% from the pre-recession peak. 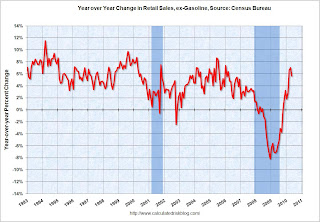 The second graph shows the year-over-year change in retail sales (ex-gasoline) since 1993.

Retail sales ex-gasoline increased by 5.6% on a YoY basis (6.9% for all retail sales). The year-over-year comparisons are easy now since retail sales collapsed in late 2008. Retail sales bottomed in December 2008.

The U.S. Census Bureau announced today that advance estimates of U.S. retail and food services sales for May, adjusted for seasonal variation and holiday and trading-day differences, but not for price changes, were $362.5 billion, a decrease of 1.2 percent (±0.5%) from the previous month, but 6.9 percent (±0.7%) above May 2009.